Reliability-based design is founded on the concept that one can estimate the probability of an undesirable event such as a fracture, occurring over the lifetime of a structure, despite the uncertainties involved. It is a design method that provides an assured level of safety by reducing the probability of such an occurence below a target value.
The quality of a design is judged by comparing the failure probablity with the target failure probablity, and this use of the failure probability makes it possible to evaluate the safety of a structure quantitatively. Above all, this design method enables one to gain a firm grasp of the safety level desired, and to design a structure so as to attain the prescribed reliablity independently of other design requirements.
Adapting this point of view, our study aims to propose a new concept of seismic design based on reliability theory.

Seismic performance of the RC bridge pier has drawn a considerable engineering attention after the devastating damege of the Hanshin Highway viaduct due to the Hyogo-Ken Nanbu Earthquake (January 17, 1995). Now the following problems are thought to require further discussion.

(a)The effects of the soil-pile interaction modeling on the seismic response of RC pier structures are studied. Special attention is paid to the response of the superstructure due to the nonlinear behavior of soil and piles in the interaction.

(b)It is necessary to study the behavior of RC-2 story viaducts and to consider the effect of the damage of their members on the seismic performance of such structures during defferent strong earthquake waves.

(c)The response analysis of reinforced concrete and prestressed concrete structures subjected to strong earthquake motions requires a realistic conceptual model which recognizes the continually varying stiffness and energy-absorbing characteristics of the structure. This study aims to propose a new force-displacement relationship. And the dynamic responses, based on the proposed characteristics of the RC and PC structures, are calculated and discussed. 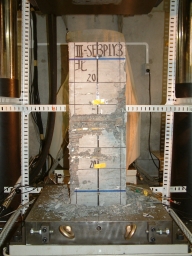